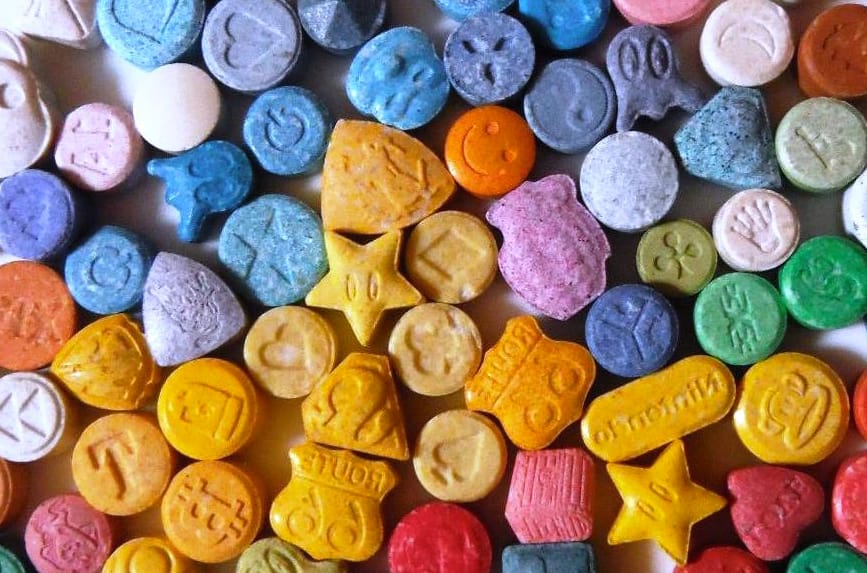 3,4 methylenedioxy-methamphetamine (MDMA) is a psychoactive and stimulant drug commonly known as ecstasy. It contains hallucinogenic properties that increase the need for emotional closeness and contact. The drug targets the nervous system and releases the brain chemicals serotonin, norepinephrine, and (in fewer levels) dopamine.

With enhanced serotonin, energy and activity levels in the brain are increased and the user can feel extreme moods and a feeling of euphoria. Instant effects of MDMA on the body are fast vital signs (heart rate and blood pressure), dilated pupils and warm body temperature that can go on for a period of time.

The original intention and use of the drug was as an appetite suppressant. As the effects of being a party drug were seen during the 1960s to the 1980s, the Drug Enforcement Administration officially declared that it had a high abuse potential with a lack of medicinal value.

In recent times, fewer ecstasy drugs contain pure MDMA. This is done to improve on variants, increase production and potency. Substances that have been found to be in ecstasy are ephedrine, piperazine, synthetic cathinones, ketamine, caffeine, dextromethorphan and, in more extreme cases, LSD, heroin and cocaine.

There are three forms of ecstasy: liquid, tablet and powder

GHB is short for Liquid Ecstasy and Fantasy - a clear, odorless liquid that causes the user to feel uninhibited, confident and extremely emotional right after taking a small dose. As the dose increases, the effects suddenly plunge--with the user becoming sleepy and rested.

GMB is salty to the taste and insoluble. This makes it undetectable when mixed with other liquids and alcohol drinks. Depending on a person’s genetic makeup, a normal dose of 1 teaspoon or 1 cap can be too weak or too strong for them.

Crystalline powder (Molly) is its purest form. It is crushed from MDMA crystals that come in the colors off-white, yellow and brown. The powder has two kinds of reproduction: one in an encapsulated form (the pill) and another molded into tablets that are combined with chemicals like methamphetamine, cocaine and piperazine. Its powder form is more potent than its tablet counterpart.

Tablets are produced in many colors and designs. The design stamped on the outside of the tablet is a branding done by laboratories that illegally make the drug. These come in various kinds of shapes: circle, oblong, square and heart-shaped. Exact doses of the drug in each pill is unknown. It is estimated that 50 to 150 mg of dosage are present in a single tablet or pill.

These are name recognitions to know the drug by.

What is Ecstasy Used For?

MDMA is used for recreation and occasionally for therapeutic purposes. As its appearance is similar to those of prescribed medicine or supplements, ecstasy is easy to transport to parties, concerts/festivals, clubs or venues that gather a significant group of people to avoid detection.

Scenarios for its potential drug use have the quality of extreme sensory movement. Loud music, technicolor and shining lights are synergistic with the effects of the drugs. For some users, taking ecstasy contributes to the energy they experience when being on a high at these events.

MDMA is also used sparingly as a psychotherapy drug for social anxiety, post-traumatic stress disorders and anxiety to life-threatening/terminal illnesses. There have been no approved medical uses for the drug. However, the Multidisciplinary Association for Psychedelic Studies (MAPS) has conducted research studies and trials that see the use of the drug for potentially relieving sickness and alcohol abuse.

It is an illegal drug. On the advice of doctors, MDMA is not meant to be taken in any standard and regular dosage. If one feels the need to take the drug for any reason, there are general guidelines to minimize long-term effects:

How Long does Ecstasy Stay in the Body?

It takes 30 minutes to 2 hours after the drug is absorbed by the blood through the small intestine. The body then processes the drug to different parts of the body (like the kidney) to be broken down even further. Blood tests are recommended to be at least 3 days after the drug is taken.

Traces of it are retained in the kidney for up to 40 hours. The drug metabolizes depending on the pH level of the urine. Normal urine carries ecstasy for up to 2 days. If the urine is less acidic, it can linger for another 24 hours. Urine medical tests that detect HMMA, a metabolite for MDMA can prove a person’s ecstasy use 5 days after taking it.

It stays longer in the hair than in the bloodstream or in urine because the drug does not go through the same absorption as inside the body. Hair tests for HMMA detection are done within a period of three months for results.

Immediate effects of low doses - these are symptoms that can be seen right after someone takes it.

The constant exposure to the drug makes a person more likely to use it. The common cause for overdose is taking the drug for a long period of time. Primary users are high school males in urban areas. Other causes of overdose would be an overlap of substances while using ecstasy. At times, a lifestyle involving drugs includes high amounts of nicotine, marijuana and alcohol in the body.

How Can You Treat MDMA Addiction?

Medical Detox is the initial solution to symptoms caused by the drug. The process involves the removal of toxins in the system caused by MDMA. It has the primary aim of restoring the brain and body’s natural function after its long-term use.

During detox, patients may exhibit symptoms of withdrawal as a result of their lack of dependence on ecstasy. In this case, a need for professional assistance for a rehabilitation center is necessary for a recovery. Users are given customized treatment plans. These may include: