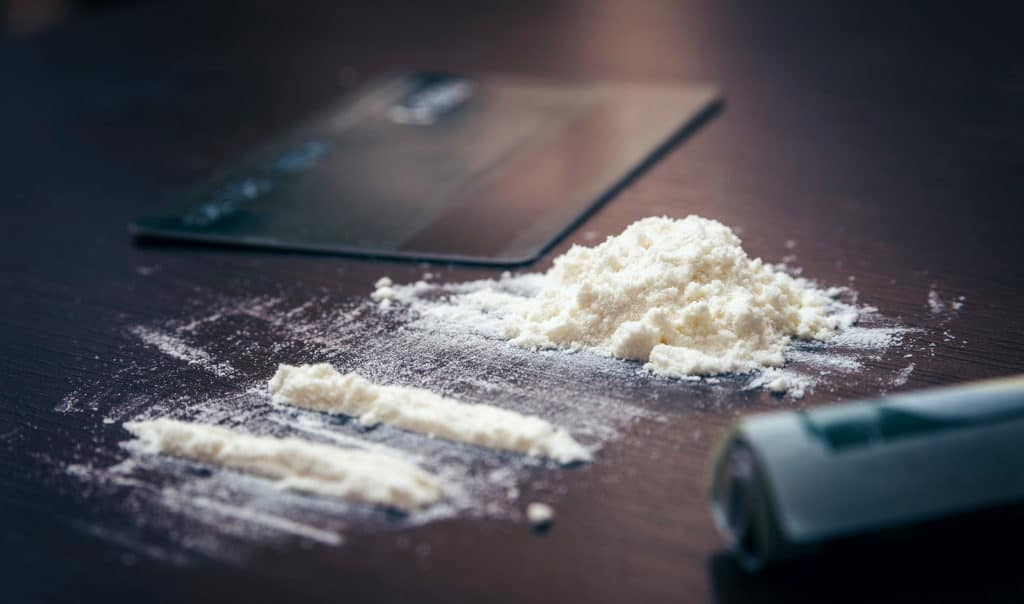 Cocaine is a bitter crystalline alkaloid C17H21NO4. It is a powerfully addictive stimulant drug that is very dangerous. While this substance is illegal, it is still considered as a Schedule 2 Drug in the U.S. - meaning it still has legal medicinal uses.

This substance which is obtained from coca leaves (Erythroxylum coca) is one of the oldest drugs in the world. The coca plant is native to South America and for thousands of years, people in that region have chewed and ingested coca leaves. More than 100 years ago, the purified chemical cocaine hydrochloride was isolated from coca leaves and in the early 1900, the purified version of it became an active ingredient in tonics used to cure many different ailments. It even became an ingredient in early formulations of the popular drink Coca-Cola®. The dried coca leaves actually contain only 1% of the substance, but these leaves undergo different processes to produce the resulting white powder.

While this substance is usually identified as a white powder, it can actually come in different forms. There are different types of this drug:

This appears in powder form with the texture similar to baby powder. The color can range from a clear white, off-white and even a yellowish or grey color depending on the levels of its purity. The highest quality of this type with 98% purity is the most expensive and looks whiter and brighter than others. The versions found in the streets are often mixed with other substances and can range from 5% to 40% purity. This form can be aspirated, snorted or mixed with water to be injected.

This drug is also found in a freebase form, popularly known as crack. This looks like rocks which are often off white in color, but can have a rosy hue that makes them appear pink. This form is normally smoked in a pipe and has much stronger effects compared to the refined version.

This form is also called cocaine paste. 50% of the drug is made of sulfate, but also mixed with other chemicals such as methanol and sulfuric acid. This is often mixed with marijuana or tobacco and smoke.

What Are The Street Names Of Cocaine?

What Are The Street Names For Crack Cocaine?

Crack cocaine also has its own street names. Nicknames include the following:

What Is Cocaine Used For?

Currently it is the only drug that is both a stimulant and an anesthetic. Because it brings euphoric effects as a stimulant, it has been abused illicitly as a recreational drug and became famous as a party drug. The user becomes hyper aware but numb at the same time.

Medically, this drug has legal uses. It is used as an anesthetic for surgeries including those involving the ear, nose, and throat. But due to its addictive qualities, use in contemporary medicine is highly limited. It has been replaced by other synthetic anesthetics. The use of this substance for medical purposes is strictly monitored and controlled.

How Does Cocaine Work?

This is a drug that stimulates the brain. When it enters the body, the drug rapidly sends high levels of dopamine to the parts of the brain that control feelings of pleasure. Dopamine is the “happy” neurotransmitter most often associated with elevating mood. This causes intense sensation of energy and alertness. Smoked coke reaches the brain very quickly than snorted powder.

How Long Does Cocaine Stay In Your System, Blood, Urine, Saliva, Hair?

How Does One Get Addicted To Cocaine?

This is a highly addictive drug that could create psychological dependence. Because of its euphoric effects, pleasure seekers use this drug to get a high. The short-lived effects mean that use of this substance can develop into a habit due to repeated doses.

Tolerance can also develop quickly, which means that addicts are prone to seeking higher doses to get the same intense feeling.

In the United States, the National Survey on Drug Use and Health found that in 2015, 1 in 20 American adults ages 18 to 25 have used the drug.

How Does Cocaine Use Affect The Brain And The Body?

Being a powerful drug, this drug significantly affects the brain and the body. People can react to this substance differently but the common effects are as follows.

Why Is Cocaine Dangerous?

Pure forms of this drug are incredibly powerful but what makes it really dangerous is that it is very difficult to determine the purity of the substance sold in the streets. For recreational users and even experienced buyers, it is considered virtually impossible to tell the difference between the type sold by manufacturers and the version cut with other ingredients.

What this means is that the potency and subsequent effects can be difficult to ascertain. While weaker forms are still damaging, not knowing the exact potency of the drug being ingested can cause unexpected effects and even accidental overdose.

Taking a large amount of the drug can make the body functions shut down – including the heart and the brain. When a person takes more coke than his body can handle, overdose can happen, however this amount can vary from person to person and also on the potency of the substance being used.

What Are The Signs Of Cocaine Overdose?

There are different symptoms that may manifest during a coke overdose including the following:

How Do You Treat Cocaine Overdose?

While there is no antidote to reverse coke overdose, emergency medical care can treat and stabilize organ functions including the lungs, heart, kidney and the body temperature. The main goal is to reduce the dangerous symptoms caused by the overdose.

For those suffering from high temperature. Applying a cold compress to cool down the temperature and prevent overheating while waiting for medical assistance. For those experiencing seizures, remove pointed or sharp objects that could cause harm to the person. Some patients suffering from respiratory failure may also need CPR or respiration.

What Are The Withdrawal Symptoms From Cocaine?

While withdrawal is rarely dangerous, the symptoms can make it difficult especially at the beginning of recovery. Some symptoms may include.

How can you treat Cocaine addiction?

Cocaine addiction is treatable. If you or a loved one is struggling with substance abuse, it is important to speak to a professional to discuss your options. There are different proven treatment modalities that can help you today.