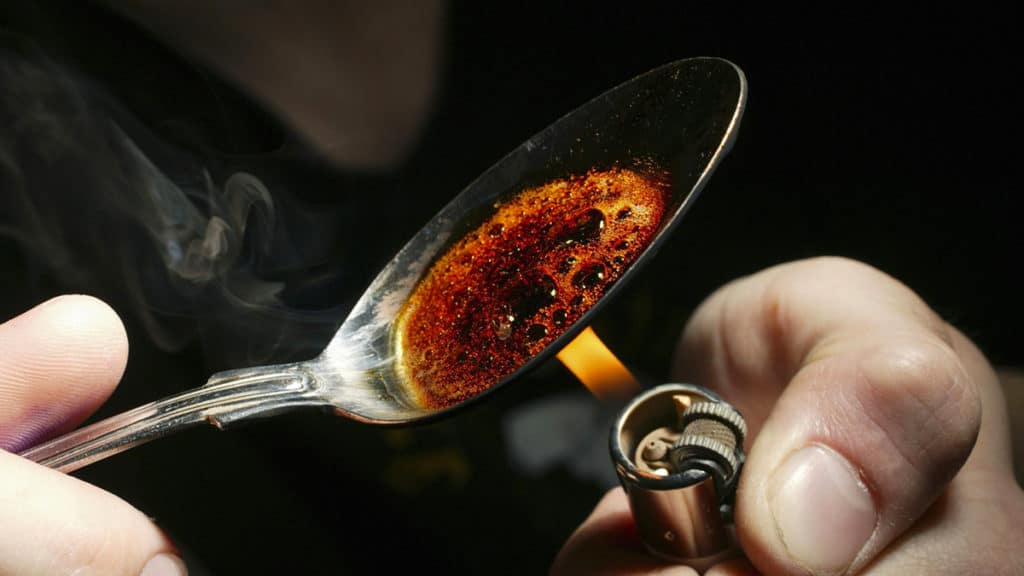 Heroin is an illegal drug that is made from morphine, which is a natural substance extracted from the seed of the opium poppy plant. Opium poppies are flowers that grow in Asia, South America, and Mexico. The opium poppy has been used for centuries for its medicinal purposes; however, it can also be used to make heroin.

Heroin is one of the more popular opioid drugs but delivers a much stronger effect than opium or morphine. While it may have come from a natural substance, heroin is still a highly addictive drug used as an analgesic and as a recreational drug. It can be sniffed, snorted, injected, and smoked.

In 1898, Bayer, a German pharmaceutical company was able to produce a drug that is 1.5 to 2 times much stronger than morphine. The head of Bayer’s research department was the one who reputedly coined the new name “heroin” based on the German wordheroischwhich means strong and heroic. While they were said not to be the first ones to make this drug, Bayer was the company that led its commercialization.

The drug was first marketed as a treatment for tuberculosis and as a “non-addictive” treatment for morphine. Ironically, morphine was also used to treat opium addiction in the 1850s.

When people started to get addicted to morphine, the use of heroin was introduced as an alternative but was subsequently proven as a more addictive drug. Heroin is also notorious for being used during World War II as a painkiller for soldiers. This should not come as a surprise since other opioids like morphine were also used by soldiers in the Civil War.

Heroin is two to five times stronger than morphine. It has the potential to enter the bloodstream very quickly making the effect very instantaneous. It can produce a rapid feeling of high especially when snorted or injected.

Compared to other prescription opioids like oxycodone and hydrocodone, the effect of this drug is much stronger. This is also the reason why opioid addicts switch because they can get a much stronger high at a cheaper cost.

Heroin is one drug that can look different depending on how it is prepared for use. It can be a white or brown powder, or a black sticky substance known as “black tar heroin.”

The pure version of the drug looks like a white powder with a bitter taste. Heroin is often mixed or cut with different substances such as sugars, starch, quinine, or powdered milk. It can also be brownish in hue.

Heroin as a white or brown powder can be snorted or injected just like cocaine and crack cocaine. These drugs are usually inhaled through the nose. heroin can be an injection drug if the powder is diluted with water and injected into the veins with a needle.

Black tar heroin, on the other hand, can be sticky or hard as coal. The black sticky substance is a result of crude processing methods that leave impurities in the drug.

What Are the Other Names of Heroin?

Heroin is also known by the following names:

What Are the Street Names of Heroin?

Because heroin is one of the illicit drugs in the United States, many heroin addicts obtain heroin on the streets.

Heroin is known in the streets by different names, depending on the area or what it is mixed with. Street heroin is usually cut with other substances to increase profit margins.

Here are some street names of heroin:

Spanish words for the drug include:

What Is Heroin Used For?

Like other sedating drugs, heroin is a painkiller. Historically, the use of heroin was to treat acute pain including severe physical trauma, chronic pain, post-surgical pain, or pain caused by end-stage cancer or terminal illnesses.

But because of it's addictive nature, the Drug Enforcement Administration (DEA) has now classified heroin as a Schedule I drug in the United States. This means that it has a high potential for abuse and is not accepted for any medical use.

Now, heroin is mostly used as a recreational drug. It is also being used to self-medicate severe muscle pain, bone pain, pain from injuries, and pain that is resistant to other drugs.

Heroin use in the United States has dramatically increased especially because of the opioid crisis, with80% of heroin usersadmitting that they have started drug use after using prescription opioids.

When prescription opioids were regulated, many opioid addicts switched to heroin which is a much cheaper and stronger alternative.

According to a United Nations report, heroin is one of the most trafficked illegal drugs in the world. Executive Director Yury Fedotovof the United Nations Office on Drugs and Crimes said that heroin is the drug that kills most people worldwide. Fedotov added that it's critical for the international community to intensify its efforts to address this global threat. He also said that using the heroin research report included in the 2016 World Drug Report released by the United Nations can be a useful resource.

How Does Heroin Work?

Heroin works by entering the brain rapidly and binding to the opioid receptors in the brain. Similar to other opioid drugs like morphine, codeine, and oxycodone, heroin also affects opioid receptors.

Opioid receptors are found in areas of the brain that control pain and pleasure. When an opioid drug reaches these opioid receptors, it causes a release of dopamine in the brain which gives the user a feeling of euphoria or “high.”

This is why like other opioid drugs, heroin use can give a feeling of well-being. Users report a surge of pleasure immediately after taking opioid drugs like heroin. However, users would usually feel drowsy or mentally confused for several hours after taking heroin.

How Long Does Heroin Stay in Your System, Blood, Urine, Saliva, and Hair?

The effects of heroin use can last for a few hours. However, heroin can stay in your system for a longer period. It's important to know that using heroin results in a positive drug test.

If you are to undergo a drug test, you may be wondering how long heroin stays in your system.

How Does One Get Addicted to Heroin?

Because of heroin's potent, powerful effects, heroin is considered one of the most highly addictive drugs. Using heroin regularly can lead to drug abuse and heroin addiction.

People who abuse heroin often develop a tolerance to the drug, which means that they need to use more and more heroin to get the same effects. Tolerance can quickly lead to physical dependence and addiction after increasing heroin use.

Physical dependence on heroin occurs when someone's body becomes so used to drugs that they cannot function without them. Heroin withdrawal symptoms set in when they attempt to quit using the drugs. These withdrawal symptoms make it impossible for many people to stop the use of heroin.

After the rise of the opioid crisis, many users addicted to prescription medication switched to using illegal heroin. Heroin use became more rampant because heroin is much cheaper to get than trying to get a doctor's prescription.

How Does Heroin Drug Abuse Affect the Brain and the Body?

Being a strong painkiller, heroin use provides similar effects as other opioids, albeit much stronger. The use of heroin can have different adverse effects on the person depending on the dose or the other drugs it's mixed with.

A small dose of heroin can give a warm and fuzzy feeling while more than one dose can make you relaxed or feel drowsy. For some people, the first dose of the drug can make them dizzy or make them vomit.

What Are the Short and Long-term Effects of Heroin?

Aside from the feelings of pleasure and the pain relief effect, there are other short-term and long-term effects associated with heroin use.

Why Is Heroin Dangerous?

In recent years, there has been a rise in overdose deaths caused by heroin addiction. According to the Centers for Disease Control and Prevention, there was a 7% increase in heroin overdose deaths from 2019 to 2020.

Aside from heroin overdoses, another danger is that heroin is also being made much stronger than before. While heroin has always been mixed with substances like sugar or powdered milk to extend the product and get more profits, many manufacturers involved in heroin production are now focusing on making heroin much stronger.

Stronger versions of heroin can quickly lead to substance abuse, drug abuse, heroin addiction, and overdose. A lot of times, users are unaware that the heroin they are taking will not give them the same effect. Instead, it can cause an overdose.

However, this increase in injection drug use has also contributed to the spread of many infectious diseases. Aside from hepatitis B, the risk for HIV/AIDS, bacterial infections, and other blood-borne diseases is also higher. This risk is also present in illicit drugs being injected into the body such as crack cocaine.

Heroin use can also lead to legal troubles. In many states, possessing and using heroin can lead to a prison sentence and hefty fines. Selling heroin, on the other hand, could even result in a sentence of life imprisonment or death penalty.

Large doses of opioid drugs like codeine, morphine, and oxycodone can lead to opioid overdose and even death. This is also the case with heroin. Taking more than one dose of heroin or taking heroin with other drugs can quickly lead to an overdose.

Many times, people who overdose on heroin don't even know that the drug they are taking is much stronger than usual. This is because manufacturers mix heroin with other drugs like fentanyl to make it more potent.

When you acquire heroin from the streets, you are not sure of what you are getting and how strong the effect will be on your body. This can quickly result in an opioid overdose.

Regular users could develop tolerance to heroin and seeking a higher dose would be a natural recourse to get the same feeling of euphoria as before.

What Are the Signs of an Opioid Overdose?

When someone is suffering from an opioid overdose caused by heroin, respiratory failure could occur. This means breathing slows down or stops. Other symptoms of overdosing on heroin include:

How Do You Treat Heroin Overdose?

Like other overdose scenarios, an opioid overdose can be treated by giving Naloxone right away. Naloxone blocks the effects of opioids. It is available as a nasal spray, injectable, or hand-held auto-injector. Naloxone is also effective to treat other opioid overdoses like oxycodone, morphine, codeine, etc.

While Naloxone is a good first-aid treatment, a person who suffered from a heroin overdose must be brought to the emergency room to seek medical help for additional support.

What Are the Withdrawal Symptoms from Heroin?

Withdrawal symptoms may occur after several hours after the drug is last taken, peaking 24 to 48 hours after use.

These withdrawal symptoms may last for a week but some may continue to experience symptoms after a few months.

How Can You Treat Heroin Addiction?

According to a study conducted by the National Institute of Drug Abuse, there are effective medicines such as methadone and buprenorphine that can help heroin substance abuse. According to this heroin research report by the National Institute on Drug Abuse, these drugs are given to help wean a person off heroin and reduce cravings and withdrawal symptoms.

In these cases, the Substance Abuse and Mental Health Services Administration recommends treating both disorders at the same time. Addressing substance abuse and mental health issues ensures that the person has the best chance for a successful recovery.

When heroin substance abuse and mental health disorders are present, you have to consider an addiction treatment center that also specializes in co-occurring disorders.

If you or someone you know is addicted to heroin, please seek professional help right away. There are many resources available to help you on your road to recovery.