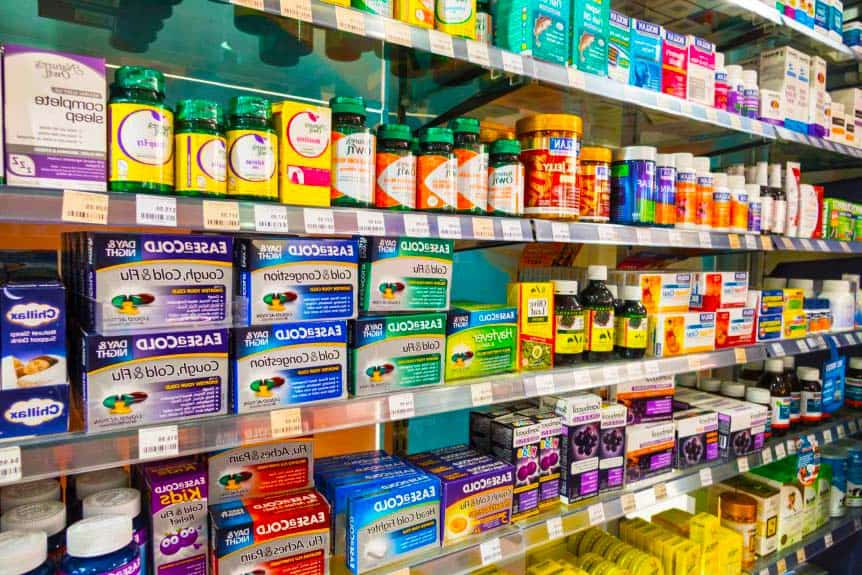 Over-the-counter (OTC) drugs are drugs that you can easily buy at a local pharmacy without a prescription. They are usually used for self-medicating with common health problems like colds, fever, pain, migraines, allergies, etc. The Food and Drug Administration or FDA decides which drugs are considered safe and effective enough to sell over-the-counter.

These drugs are different from health foods, dietary supplements and complementary therapies because they have been studied scientifically and extensively. The most important area of concern with these drugs is with their benefits and risks. As we all know, all drugs have certain risks that are associated with their use. These drugs have been found to have an acceptable degree of risk. To determine whether a drug is safe enough to be made available over the counter, these questions can act as a guide.

What is the History behind Over-the-Counter Drugs?

Before there were any regulations regarding the selling of drugs, most available drugs can be bought without any prescription. Because of this, some dangerous drugs were also made available in local pharmacies that anyone can just buy. These include: alcohol, cocaine, marijuana and opium.

A set of laws called the Food, Drug, and Cosmetic (FD&C) Act, was passed by congress in 1938. These laws gave authority to the US FDA to oversee the safety of food, drugs, medical devices and cosmetics. Also in that year, the FDA formed the Drug Efficacy Study Implementation. Its job was to study and investigate the effectiveness of the drugs that were previously available in the market. In 1951, the act was amended to clarify the difference between prescription drugs and OTC drugs. They defined prescription drugs to be compounds that could be habit-forming, toxic or unsafe for use except under a doctor’s supervision. Any drug that does not fall under this category can be sold over the counter.

How Can You Ensure Safe Use of Over-the Counter Drugs?

Even though OTC drugs are relatively safe, care must still be taken when using them. Here are some tips to ensure safety and maximum effectiveness of the drug.

Can Over-The-Counter Drugs Be Addictive?

OTC drugs are definitely safe if taken strictly at their recommended dosages. However, they can also be abused. These drugs still pose some risk in developing addiction even if they are much less potent. This can lead to health problems including: memory loss, kidney failure, heart problems and death.

The most commonly abused OTC drugs are:

What are the Effects of Addiction to OTC Drugs?

Like with any other addictive drug, OTC drugs can also cause tolerance to the user, making them take more and more of the drug to get the same effects as when it was first used. Users may also not think of these drugs to be addictive, which can lead to more of its abuse. Since these drugs are much less potent than other addictive drugs, spotting addiction to this drug can be difficult. However, there are still signs that we can look for in determining addiction to these drugs. These are: wanting to cut back on use but being unable to do so, intense cravings to use the drug, the use of the drug is given much more priority, lack of desire to socialize, and worsening physical and psychological problems.

When the user suddenly stops taking the drug, withdrawal symptoms may also develop. These include: confusion, hostility, anxiety, mood changes.

What are the Available Treatments for those that are Addicted to OTC Drugs?

There are many treatment options that are available for individuals that are addicted to OTC drugs. These include: individual and group therapies, mental health counseling and psychotherapies like Cognitive Behavioral Therapy (CBT). There are also rehabilitation programs that can be taken as an inpatient or an outpatient. These can all significantly help any patient on their way to complete healing and recovery from their addiction.