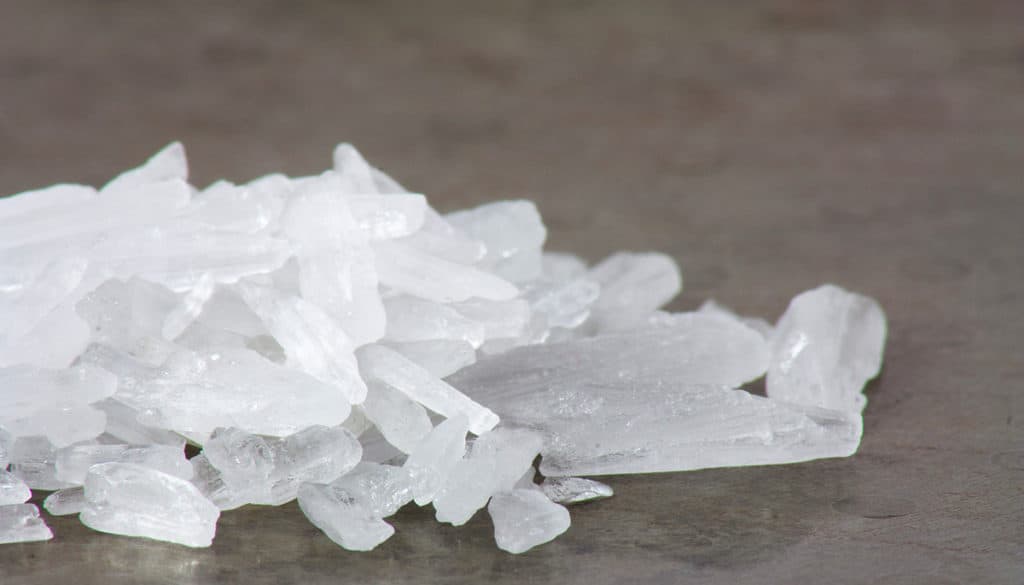 Meth is the informal term for methamphetamine which is a potent stimulant for the central nervous system. It’s a synthetically produced drug that belongs to the substance class of amphetamines.

In 1893, the drug was first synthesized in liquid form by Japanese chemist Nagayoshi Nagai. The molecular formula of methamphetamine is C10H15N.

This is a Schedule II drug meaning it has legal medical uses, however, it has been most commonly used illicitly as a recreational drug. As a stimulant, the euphoria brought by use of this substance made it one of the most addictive drugs in the United States.

What are the other names of meth?

What are the street names of meth?

This substance can come in a variety of forms depending on how it is manufactured.

This is one of the most common forms of this drug sold on the streets. It can have different levels of fineness but usually resembles chalk dust or cocaine. Pure speed is colorless but it is often white or off-white in color. but it can also appear pink, yellow, green or adopt other shades depending on what it is cut with.

It has a bitter taste and odorless but if mixed with other ingredients, it can also smell like urine or rotten eggs. The powder is frequently snorted. It is also dissolved in water and injected to the vein, while some people swallow it.

This is a solid form of the drug that resembles shiny fragments of glass, rock salt or quartz. It is made by dissolving the powder until clear, chunky crystals develop. It is usually translucent but can also adapt a bluish shade. It produces a longer lasting high than the powder form.

Crystal methamphetamine is often smoked or injected. It also has its own street names.

This drug is also made in pill or tablet form. There are green or reddish colored tablets named "yaba" that are made with a mix of 30% methamphetamine and caffeine. Yaba pills are usually smaller than aspirin tablets and are stamped with the letter R or WY.

Pills can be swallowed or vapors inhaled, while others may crush the pills to snort or dissolved in water to be injected.

It can also take the form of dark yellow, syrupy fluid. It is usually stored in liquor bottles or other containers. This substance is rarely sold on the streets in liquid form. It is usually converted back into glass-like shards or powder before being sold.

What is meth used for?

This substance has medical uses. The US Food and Drug Administration approved a legal form of methamphetamine under the brand name Desoxyn. Because it helps in improving alertness, it is often prescribed for people who suffer from severe attention deficit disorder. It is also being used for obesity treatment when other courses of medications are ineffective. A low dosage is also used to treat cold-induced nasal mucosal swelling

Historically, it was used in world wars to improve the focus of soldiers and pilots. It was also used to compensate for fatigue, cold and hunger. In Germany, it was also used as a fatigue medicine called Pervitin, but it was withdrawn in 1988.

This drug is one of the most abused and addictive drugs in the world. It is used recreationally for its euphoric effects. It is used as a party drug because it also increases sexual desire and pleasure.

How does meth work?

When a person takes meth, this facilitates the release of hormones/neurotransmitters, particularly noradrenaline, serotonin and dopamine. These send signals through your brain and your body to produce different effects.

Noradrenaline is the fight or flight chemical that prepares a person to respond to threats. It causes an increase in blood pressure, heart rate, dilates the pupils, and widens air passages.

Serotonin is a chemical that regulates mood and can affect appetite, digestion, sleep and social behavior.

Dopamine is commonly known as the happy hormone because it is primarily responsible for feelings of pleasure when people engage in different activities. It is also responsible for keeping the attention focused and in memory function.

How strong is meth?

When this substance is used, it stimulates the release of these neurotransmitters all at once. It releases more than three times the amount of dopamine than cocaine and it is also said to raise dopamine levels ten times than any other non-drug related pleasurable activity. This just shows how potent it is and how easy it is to get addicted to the drug,

How does meth use affect the brain and the body?

Being a powerful stimulant, it can have the following effects:

When smoked or injected, it can produce a feeling of rush that can last up to 30 minutes. After this rush, there is a steady high that usually last between 4 to 6 hours which is dependent on the mode of consumption.

The drug forces the release of the stored hormones all at once, which causes the intense high. However, the neurons can only store a certain amount of dopamine at any one time, which means that even if users take the drug again immediately after the feelings of high, he may not be able to feel the same rush again. This is because it can take from two to ten days to restore dopamine. During this time, users can feel different side effects.

What are the short-term and long-term effects of meth use?

When users empty their stores of happy hormones, and while their bodies are still restocking these hormones, they could feel the opposite effects brought about by meth. These affects resemble withdrawal symptoms including:

Long-term use can also cause damaging mental and physical effects overtime including:

Drug users are also exposed to risks of HIV and infectious diseases due to shared needles.

How does one get addicted to meth?

This substance is one of the easiest drugs to get addicted to because of the powerful feelings of pleasure it brings. The addiction potential is extreme, in fact, there have been many accounts from people who get addicted just after one use. People who use it recreationally to get the euphoric effects would constantly seek out the drug.

People who use it functionally either to stay awake or for weight loss get addicted, especially if they are not aware of the risks involved. They may not be aware that using the drug have high addictive potential.

Users can develop tolerance for the drug which happens when they increase the dose to get the same level of high. Like other drugs, compulsive use will make your body unable to produce the same feelings making you crave more.

In the United States, abuse of this substance is rampant. While the government crackdown on production and trafficking led to a decrease in usage in past years, news reports are now stating that use of speed is back and is fast rising across the US.

According to Erik Smith, a DEA special agent from Kansas, usage of methamphetamine nationally is at an all-time high. The focus on opioid abuse has overshadowed how meth use has also become a mounting problem as drug cartels infiltrate vulnerable rural areas. The new version is also now reportedly stronger and cheaper

How long does meth stay in your system, blood, urine, saliva, hair?

If you are to undergo a drug test, you may be wondering how long the drug stays in your system.

Why is meth dangerous?

The danger in using this substance lies on its ability to trigger a faster dependency than almost other illegal drugs due to its powerful effects.

According to UCLA clinical psychologist Jim Peck, this drug is so powerful that they have seen people who become addicted just after one or two uses. It is also considered as one of the hardest drugs to permanently quit.

An overdose can be acute or chronic. Acute overdose happens when users take a larger dose than the body can handle, thus over stimulating the nervous system. This can potentially result in disrupting the normal function of the body.

Chronic overdose on the other hand refers to the damaging effects that accumulate over time due to long-term compulsive use of meth.

What are the signs of meth overdose?

For Acute Overdose, the signs include:

How do you treat meth overdose?

Some of the effects of overdose can be life-threatening so it is important to call professional emergency responders immediately. While waiting for the medical team to arrive, you can do the following:

Apply cold compress to the face and chest if the person is overheated. This will help keep the body temperature down.

If the person is experiencing seizures, hold them down and remove sharp objects that may hurt or cause injury.

Once a person survives an overdose from this drug, it is important to seek drug treatment as soon as possible to avoid a fatal episode in the future.

What are the withdrawal symptoms from meth?

The withdrawal symptoms from methamphetamine use can be intense and can last for several days and weeks. Symptoms begin as early as 24 hours after use. Unlike other hard drugs, a user will not experience flu-like symptoms, nausea or vomiting. The main physical symptoms are feelings of tiredness and lethargy. What usually pushes a relapse are the mental effects. The loss of the feelings of pleasure can be difficult and painful resulting in depression.

Here is a timeline that shows the drug’s withdrawal symptoms.

How can you treat meth addiction?

While addiction to this substance is considered one of the hardest addictions to treat, it is possible to recover from this drug. This is the reason why it is doubly critical to seek out reputable, professional help who can recommend a suitable mode of treatment.

If you or a loved one is struggling with drug abuse, it is important to speak to a professional to discuss your options. There are different proven treatment modalities that can help you today.