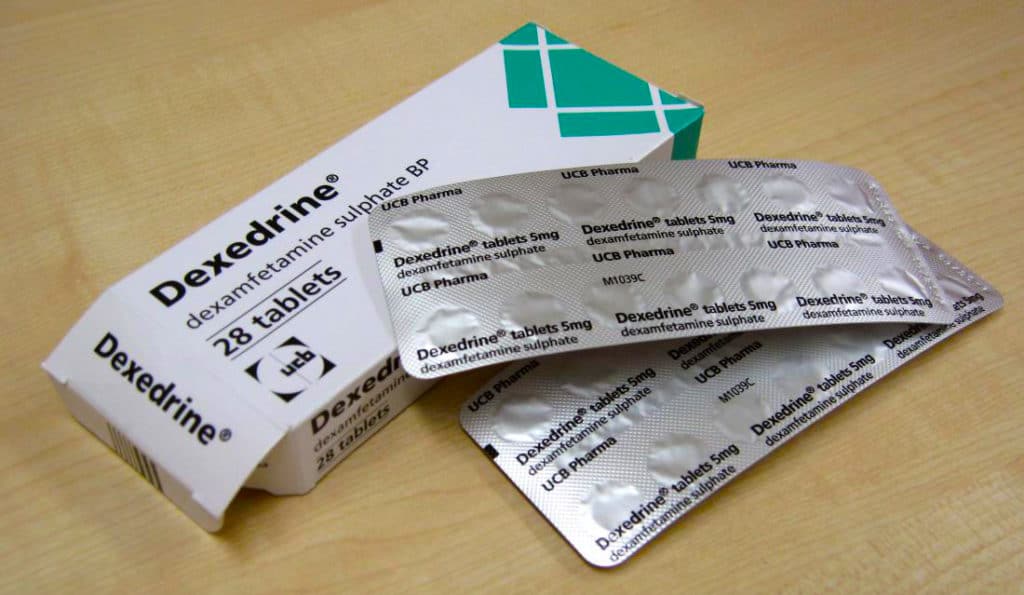 Dexedrine is the brand name for the chemical compound dextroamphetamine sulfate under the amphetamine group, specifically a sympathomimetic amine substance. This substance alters the actions of the endogenous catecholamines of the sympathetic nervous system (“fight or flight stimuli”). This part of the autonomic nervous system controls the body’s involuntary muscles or processes.

This prescription drug is typically sold in the market in four shapes: round, diamond, three-sides, and Spansule. Below is a summary chart to describe the physical appearance of this drug in the market.

What are the other names of Dexedrine?

This prescription CNS substance is known by the following brand names:

Its generic name is dextroamphetamine sulfate.

What is Dexedrine used for?

This prescription drug is a sympathomimetic amine substance which is mainly used as a standard treatment for attention-deficit hyperactivity disorder (ADHD). The formulation of this medicine aims for a gradual release of an active chemical in the blood. The effect is improved focus and stable behavior for patients.

In addition, an old usage of this substance is to treat narcolepsy or inability to sleep well. Meanwhile, during the 1970s, this prescription drug was known as Obetrol and used to treat obesity.

How does Dexedrine work?

Medication using this prescription drug induces peripheral actions such as an increase in blood pressure and enhanced respiratory action. Likewise, it stimulates dopamine secretion in the mesocorticolimbic system which later induces a euphoric feeling.

How strong is Dexedrine?

This prescription drug has a high addictive potential comparable to methamphetamines and amphetamines. In history, during World War II, the main chemical component of this medicine together with meth was used by the soldiers to keep them awake and alert always.

This substance has also been classified by the Drug Enforcement Agency (DEA) as a Schedule II stimulant. An amount less than 15mg of this substance exhibits the same addictive level as cocaine, meth, methadone, hydromorphone and other illicit drugs under Schedule II.

When using this prescription drug to treat ADHD and narcolepsy, proper dosage must be observed to avoid any strong side-effects of this substance. Below are the recommended dosages when using this drug for medication of the two illnesses.

For patients ages 6 years and above: Initial dose at 5mg once or twice a day; daily dose can be increased by 5mg per week until a full response is achieved

How long does Dexedrine stay in your system, blood, urine, saliva, hair?

How does one get addicted to Dexedrine?

This prescription drug is comparable to methamphetamine and cocaine in terms of addictive potentials. Addiction is directly linked to tolerance on any substance. Addiction to this drug starts when the persons take it in for the wrong reason such as to gain an academic achievement, to enhance sports skills, to lose weight, to fight mental fatigue, and to attain an intense feeling of excitement.

Intranasal and intravenous methods of taking in the chemical substance pose a higher chance for the person to get addicted. These two methods give a faster euphoric sensation for the user.

How does Dexedrine use affect the brain and the body?

Enhancing the production and secretion of these two neurotransmitters gives off the following effects: inhibits mental fatigue, enhances mood, provides intense excitement, and activates the senses.

What are the short and long-term effects of Dexedrine?

This medicinal substance can cause both short-term and long-term effects. Below are the following effects when using this drug:

Why is Dexedrine dangerous?

This chemical substance is very dangerous. Extensive dosage and abuse of it will lead to cardiovascular failure, cerebral hemorrhage, gastrointestinal malfunction, and respiratory failure. Both short-term and long-term effects of this prescription drug can be dangerous if taken for granted, considering there’ll be dosage increments for those who have gained dependence.

Moreover, improper use of this drug paired with other illicit stimulants can lead to severe psychosis, chronic intoxication, and schizophrenia.

Drug overdose is directly linked to a person’s tolerance. Overdose for this drug rarely happens at low dosages, less than 15mg. Severe reactions can be observed at 30mg dosage while more damaging effects can be induced for 400-500mg dosage.

Overdosage from this prescription drug has several symptoms which vary in intensity depending on the amount taken and frequency. Below are some of the typical signs and symptoms for Dexedrine overdose:

How do you treat Dexedrine overdose?

In order to help those people who have experienced overdose with this drug, the following treatments or procedures are recommended:

What are the withdrawal symptoms from Dexedrine?

Withdrawal symptoms of this drug may occur after a few hours after the drug is last taken, peaking 24 to 48 hours after use. Abrupt cessation from excessive dosage results to severe fatigue, mental retardation, and irregular sleeping patterns. Below are some of the other evident symptoms for withdrawal:

How can you treat Dexedrine addiction?

Abuse for any kind of prescription or illicit drugs is treatable. Treatment must be done step-by-step for complete recovery. You can consider the following steps for your treatment process: