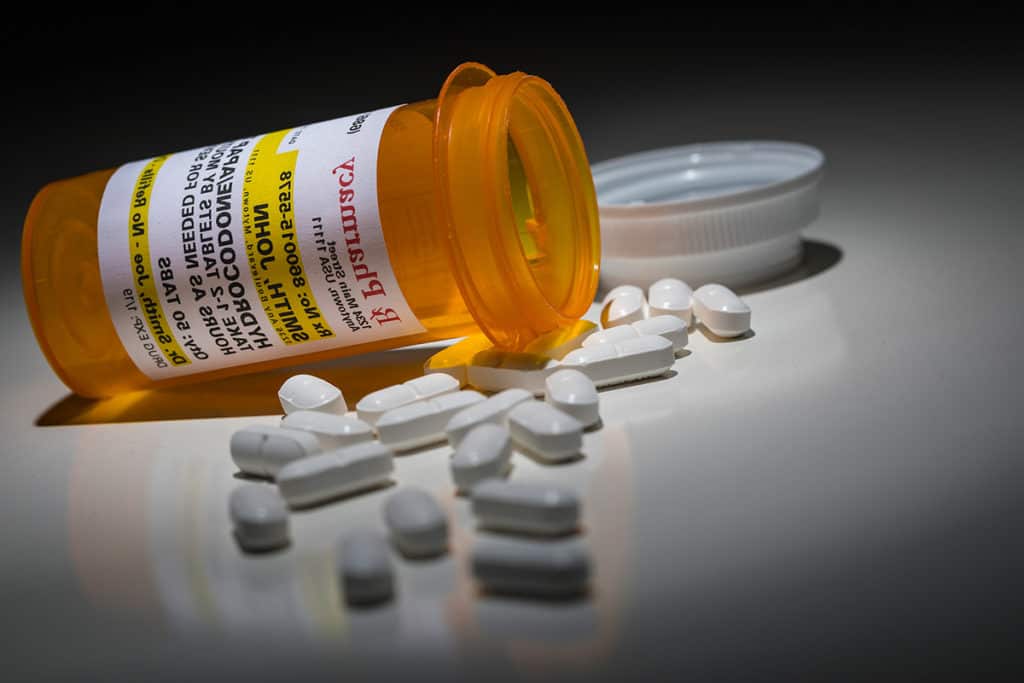 Hydrocodone is an opioid analgesic (painkiller) drug. It is usually combined with Acetaminophen, which is a classic non-narcotic analgesic. The most common combination of these 2 drugs is Vicodin. It is used as an antitussive (cough suppressant) and a narcotic pain reliever for the treatment of moderate to moderately severe pain. It has been shown to be as effective as codeine for cough suppression and nearly as potent as morphine for pain relief. It is the most frequently prescribed opiate in the United States.

What are the Generic and Brand Names for Hydrocodone?

There have been several versions of this drug that are available in the US market. These are:

How does Hydrocodone Work?

Like with any other opioid drug, this drug works by binding to the receptors in your brain, blocking pain signals while also flooding your brain with dopamine. This gives euphoric effects and makes it addictive for the user.

How Strong is Hydrocodone?

This drug is around 10 times less potent than hydromorphone (Dilaudid). It also has a half-life of 4 hours. This simply means that your body will take somewhere around 4 hours to process half of the ingested drug in the blood’s plasma.

How Long Does Hydrocodone Stay In Your System, Blood, Urine, Saliva, Hair?

What are the Short-Term Effects of Hydrocodone Use?

Other more serious side effects of this drug arise because of its depressant quality. This can slow down your body’s typical rate of functioning (slowed heartbeat, delayed breathing, etc.) which can lead to other complications like bowel obstruction, breathing problems, slowed or irregular heartbeat, severe allergic reaction such as rash, hives, itching or swelling, trouble urinating, and vomiting.

Long-term use of this drug frequently leads to tolerance. This means that the patient will need to take more of the drug in order to get the same effect as when the drug was first used. Because of its strength relative to other opioid drugs, tolerance can develop very quickly. There have been cases of tolerance developing on patients after just a few doses. Long-term effects of hydrocodone use can include a broad range of physical problems which includes acetaminophen toxicity, liver damage and sensorineural hearing loss.

How commonly is Hydrocodone Abused?

Since it is the most commonly prescribed opioid drug in the US, it is also the most commonly abused. In 2011, the Drug Abuse Warning Network (DAWN) estimated that there were more than 82,000 emergency room incidents which are related to its non-medical use. In 2012, over 29,000 hydrocodone-related exposures and 36 deaths have been reported according to the American Association of Poison Control Centers. And in 2013, 4 million people over the age of 12 were reported using this drug for nonmedical purposes.

The abuse of this drug is not limited to adults. The 2014 Monitoring the Future (MTF) Survey has found out that close to 6% of high school seniors had, at some point in their lives, used this narcotic without a prescription. One factor that may have caused this is that adolescents mistakenly think that this drug is safer than those illegal drugs sold on the streets because it is a prescription drug. .

What are the Effects of Drug Dependence to Hydrocodone?

Those that are addicted to this drug will also most likely develop dependence. When this happens, that person may not be able to function normally. These are the signs that dependence to this drug has already developed:

What are the Effects of Hydrocodone Addiction?

Even patients that are using the drug according to prescription can be addicted to it. But a more common cause of addiction to this drug comes from patients taking it that have developed tolerance to the drug. They continuously take more and more of the drug to get the same effects and before they know it, they are already addicted to it. People have also been abusing this drug to use its euphoric effects to escape personal problems and negative emotional states such as depression.

Addiction to this drug can be determined from these signs:

Addiction to this drug may then lead to overdose because of its use without professional supervision. Overdose from this drug can lead to more serious effects which include: generalized muscle weakness, slowed breathing, slowed heartbeat, cold or clammy skin, profound drowsiness, loss of consciousness, coma and death.

What are the Available Treatments for People Who are Addicted to Hydrocodone?

Like with other opioid drugs, inpatient treatment centers are available for these types of patients. The treatment usually starts with a detox process. This can produce very uncomfortable symptoms which, if not monitored in the same way as in an inpatient treatment center, can cause the patient to go back to the use of the drug. Some forms of medication are also given to the patient to help them in these withdrawal symptoms. Mental health treatments are also given to patients in some cases.

But what is most valuable in these inpatient treatment centers is that they provide a very helpful and supportive community that the patient will be able to relate to. This can greatly help the patient in learning how to live a normal life without the drug that they are addicted to.