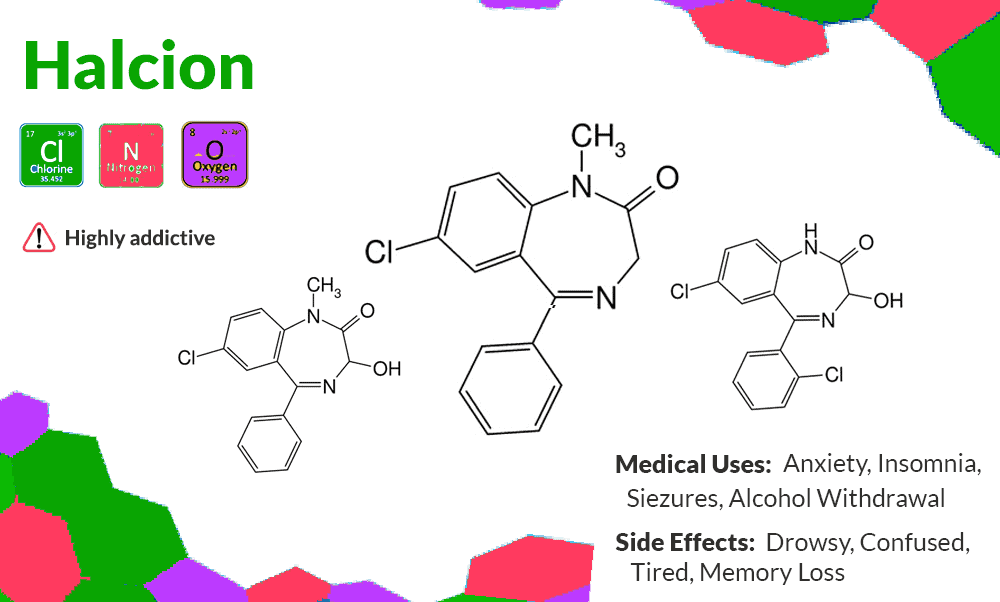 Halcion is a prescription drug that contains the active ingredient triazolam which is under the benzodiazepine class. This drug is used as a short-acting treatment for insomnia which is prescribed for around 7 to 10 days. The sedative-hypnotic effect of triazolam counteracts the action of insomnia.

In its purest form, this drug is a white or pale yellow crystalline powder which is soluble in alcohol but not much in water. Its molecular weight is 343.21.

In the market, it’s sold in tablet form containing 0.25 mg of the active ingredient. The tablet has an elliptical shape, color blue, and with an imprint “HALCION 0.25”. The inactive ingredients combined with this drug include cellulose, corn starch, docusate sodium, food grade coloring (No.2 Blue), lactose, magnesium stearate, silicon dioxide, and sodium benzoate.

What are the other names of Halcion?

What is Halcion used for?

This prescription drug has both medical and recreational applications. This drug is mainly used to medicate people having sleeping difficulties. Taking the drug can help you sleep quicker, have longer sleeping time, and it can decrease the frequency of sleep interruptions at night.

Aside from its medical function, it’s also commonly misused for recreational purposes. Most people abuse this drug by taking it alongside heroin, cocaine and alcohol to increase their euphoric feeling.

How does Halcion work?

This drug works on the brain specifically on the GABA-A-chloride-ionophore receptor site which is located on the neuronal membrane. The binding of the drug’s active ingredient in the site causes stimulation of the GABA neurotransmitter which opens the chloride channels. The interaction of the chloride ions and neurons result in a decrease in brain activity and resistance to an excitation state. Overall, this induces the sedative-hypnotic effect on the brain and body.

How strong is Halcion?

This prescription drug is classified by the DEA as a Schedule IV controlled substance. As a standalone, it has a lower potential for abuse and dependence compared to Schedule III substances. However, it poses serious adverse effects when misused and ingested together with other illicit substances such as heroin and cocaine. Likewise, this medicine is highly reactive with the following substances: isoniazid, oral contraceptives, grapefruit juice, and ranitidine.

The recommended dose for adults is 0.25 mg but reports have stated that 0.125 mg gives enough effect for the person. A dose of 2 mg four times daily without prescription presents a high risk of addiction. This medication takes effect 10-15 minutes after it is orally taken while its optimal impact develops 1.3 hours. Further, this drug has a fast-acting tolerance development with its sedative effect.

How long does Halcion stay in your system, blood, urine, saliva, hair?

This drug has a short half-life between 1.5 to 5.5 hours. If you are to undergo a drug test, you may be wondering how long this drug stays in your system.

How does one get addicted to Halcion?

Abuse and addiction of this drug typically happen when taken in combination with other psychoactive substances such as heroin and cocaine. In addition, people who intake more than 0.125 mg without prescription are highly susceptible to tolerance and dependence.

How does Halcion use affect the brain and the body?

This medication targets the GABA receptor site of the brain. Upon reaching the site, it stimulates the secretion of GABA neurotransmitters which opens the chloride channels. This saturates the neurons with chloride ions. This event decreases cerebral activity and induces muscle relaxation.

What are the short and long-term effects of Halcion?

Aside from inducing sedative-hypnotic effects, there are other short-term and long-term effects associated with the use of this drug.

Why is Halcion dangerous?

This drug is dangerous because when abused, you can easily develop tolerance and dependence. Excessive intake of this medication can lead to extreme sedation, respiratory failure, and coma. Likewise, the availability of this drug contributes to the increased drug abuse in combination with other illicit psychoactive drugs to increase its euphoric effect.

An overdose with this medication is attributed to its quick tolerance development and high probability of being misused for recreational purposes. Further, oral ingestion of 2 mg four times daily of this medication leads to overdose.

Below are some of the evident signs and symptoms of overdose.

How do you treat Halcion overdose?

The severity of the overdose depends on the patient’s present health condition, the presence of other abused substances, and the duration of overdose. Below are some of the treatments you can apply to alleviate overdose.

What are the withdrawal symptoms from Halcion?

Withdrawal symptoms occur 1 to 2 days after the drug was last taken. These symptoms may last for a week but some may continue to experience symptoms after a few months.

How can you treat Halcion addiction?