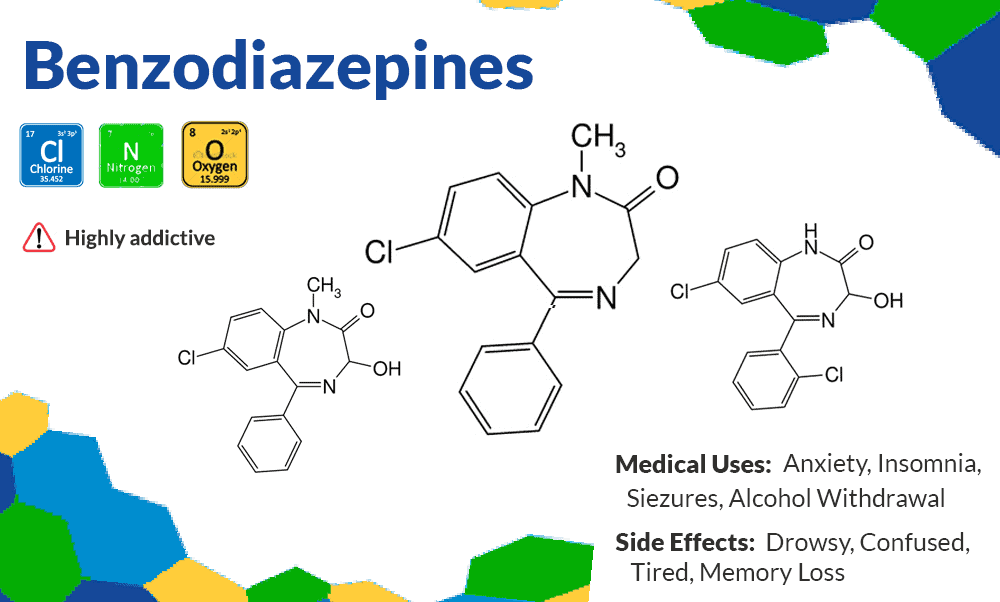 Benzodiazepines are types of prescription drugs that act on the central nervous system for a wide range of applications that include anxiety, seizures, and alcohol withdrawal.

The medical field believes that mental disorders induce dramatic nerve activities which need to be suppressed in order to gain mental stability. These drugs are formulated to slow down nerve activities in the brain and spinal cord by stimulating the release of GABA.

These prescription drugs can be in tablet, capsule and liquid form. Most medicines under this class are taken orally either in tablet or capsule form such as Valium, Ativan, and Librium. Examples for those taken intravenously is midazolam (Versed) while others are dissolved under the tongue such as Ativan.

What are the other names of benzodiazepines?

Here are the following brand and generic names under this drug:

What are benzodiazepines used for?

These prescription drugs have the general effect of calming the brain. Below are the specific medical applications for these substances.

How do benzodiazepines work?

These substances generally work by depressing the central nervous system. They target specific parts of the brain called GABA-A receptors. GABA serves as the main neurochemical that blocks or slows down nerve action. There are three kinds of GABA receptors: GABA-A, GABA-B, and GABA-C. These receptors regulate body movement, vision, anxiety, and several neural actions.

These prescription drugs stimulate the inhibitory activity of the GABA receptors by opening the GABA-activated chloride pathways and allowing chloride ions to enter the neuron. As a result, the neurons become negatively charged and resistant to any stimulation. This action induces the sedative, anti-anxiety, or anti-epileptic function of these medicinal substances.

How strong are benzodiazepines?

All prescription drugs under this group are classified by the DEA as Schedule IV controlled substances. Technically, they have a lower potential for abuse compared to Schedule III substances but they still pose a huge potential for dependence and misuse.

As a group, they do not cause excessive enzyme elevations and are rarely linked to acute liver diseases. However, high dosage intravenous intake of these substances can lead to severe side effects such as coronary blood vessel expansion and neuromuscular blockade or paralysis. Further, these prescription drugs are highly reactive with several other substances resulting in a magnified effect that can lead to heart and lung failure.

Here are some of the substances that have drug interactions with these medication drugs:

There are several kinds of these medicines under this group with varying duration effects and illnesses to treat. Below are some of the specifications for each kind.

How long do benzodiazepines stay in your system, blood, urine, saliva, hair?

If you are to undergo a drug test, you may be wondering how long these drugs stay in your system.

For further information, below is a summary chart showing the half-lives of common prescription drugs under this group.

How does one get addicted to benzodiazepines?

Likewise, any person who uses these drugs for more than 2 to 4 weeks without the advice from a medical personnel is more prone to tolerance and addiction. Addictive potentials to these prescription medicines are high to people who also use heroin and cocaine.

How does benzodiazepine use affect the brain and the body?

The use of these prescription drugs affects the GABA receptors in the brain wherein it stimulates the secretion of GABA neurochemicals which slows brain activity and resists any stimulation. In effect, it relaxes the mind, mood, and muscles of the user.

What are the short and long-term effects of benzodiazepines?

Why are benzodiazepines dangerous?

These medications are dangerous for two reasons: (1) addiction poses severe health dysfunction and (2) severe side effects associated with their reactivity to other drugs. Abuse of these medications can lead to severe adverse health effects such as verbal dysfunction, seizures, extreme sleepiness, hypotension, breathing difficulties , and extreme muscle weakness. Further, a continued high-dosage intake of these drugs can increase the risk of developing dementia, which is a mental illness resulting in gradual memory loss and decreased brain functionality.

Overdose from these drugs happens when the person takes more than what is prescribed by the medical personnel in order to achieve faster results. Further, people tend to overdose on these substances when mixed with other drugs such as alcohol, heroin, and cocaine for recreational purposes.

How do you treat benzodiazepines overdose?

Flumazenil (Romazicon) is the common medicine to counteract the adverse effects of benzodiazepine overdose. This treatment drug stops the main effect induced by the substance being overdosed by competitive interaction at the specific receptor in the brain.

What are the withdrawal symptoms from benzodiazepine?

How can you treat benzodiazepine addiction?

Abuse of these kinds of substances is treatable. Treatment must be done step-by-step for complete recovery. You can consider the following steps for your treatment process: